You are here: Home / Fires/Accidents/Disasters / Corps of Engineers warns of potential of flooding along Missouri River basin 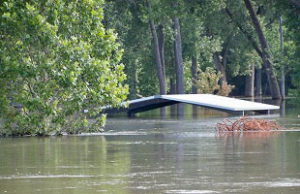 More reports are trickling in which predict Iowa could face a serious flooding problem this spring.

The U.S. Army Corps of Engineers is the latest agency to issue a warning about the potential for “major-level” flooding, based on the snowpack in the Rocky Mountains. Kevin Low, a hydrologist with the Missouri Basin River Forecast Center, offers this update.

“Snowpack conditions in the mountains can be categorized as near-normal to a little bit above normal,” Low says. “By this point in the winter, we’ve accumulated usually about 80% of the seasonal peak snow-water equivalent in the mountains, so we’re getting close to seeing what we’re going to see.”

While the mountain snowpack may only be slightly above normal, there’s a lot of snow on the ground across the region which will soon melt as well. Low says the Corps of Engineers is putting out a series of long-range flood outlooks for the upcoming three months. “These outlooks call for major-level flooding along many of the tributaries in South Dakota and in Iowa,” Low says. “Specifically, we are projecting major-level flooding along the Big Sioux in South Dakota and in Iowa, and on the Floyd and Little Sioux rivers in Iowa.”

The river that comprises the border between Iowa and Nebraska may also soon experience a level boost. “The Missouri River downstream of Gavins Point Dam is also expected to see moderate-level flooding this season,” he says. Low says localized flooding due to ice jams is also possible over the next few weeks.