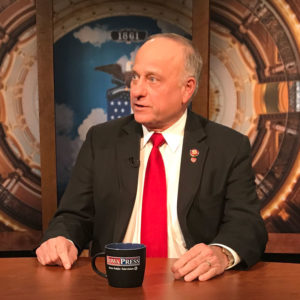 The resolution mentioned “imputations of dual loyalty.” That addressed comments from a Minnesota Congresswoman who suggested U.S. backers of Israel exhibit dual loyalty, a remark condemned as antisemitic.

King, as you may recall, was the subject of a House resolution passed in January mentioning his comments to The New York Times about white supremacy. King has said he was misquoted. The Republican leader in the House said it wasn’t the first time King made such a remark and King was stripped of his committee assignments.

John Kennedy, a spokesman for Congressman King, issued a written statement saying King voted present on this week’s resolution “because he isn’t going to validate a rigged game which punishes Republicans for things they don’t say, while moving heaven and earth to provide cover to Democrats for the things they did say.”