You are here: Home / News / Sanders says his ‘transformational’ ideas are gaining momentum 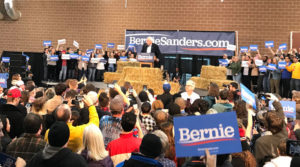 Vermont Senator Bernie Sanders wrapped up a three-day campaign swing through Iowa with a rally in Des Moines this morning.

Sanders is staking his second bid for the White House on the agenda he ran on in 2016 — raising the minimum wage, guaranteeing health care to all and combating climate change.

“In 2016, this is where the political revolution began — right here in Iowa,” Sanders said. Sanders says the public is embracing his “transformational” ideas.

“If we do not win, I will strongly support the Democratic nominee and hope and believe that others feel exactly the same way. Donald Trump must be defeated!” Sanders said, getting a roar of approval from the crowd.

Many rally-goers, like Carol Smith of Creston, wore their “Bernie” campaign gear from 2016.

“I love Bernie from before,” Smith said. “I’m checking out all the candidates.”

While not yet ready to commit to voting for Sanders in 2020, Smith bristles at the idea the 77-year-old Sanders is too old.

“He had a huge shot last time around. He’s got name recognition and he’s got some good money rolling in right now,” Vaughn said before Sanders spoke. “…I’m just seeing what’s out there. It’s really early yet.”

Sheila Campbell of Des Moines began following Sanders’ career before he ran in 2016.

“He was pretty unknown the last time around and he just ran out of time. He was climbing in the polls. He closed a 60-point gap and now he just picked up where he left off,” Campbell said. “The excitement’s still there. I think they’ll have a hard time stopping him this time.”

Gretchen Burch of Des Moines caucused for Sanders and plans to support him in 2020.

“Bernie is the only candidate that I would be interested in,” Burch says. “I feel like he really knows how to connect with the everyday people.”

Her son Jordan Burch, a junior at Central College, also caucused for Sanders in 2016.

“I’m just kind of on the fence. I’m doing my research now, so just kind of figuring out who I really want to vote for when it comes time,” he said.

Sanders was on stage for about an hour today, drawing cheers as he outlined his policy priorities — and prompting boos when he spoke of the fossil fuel industry, pharmaceutical companies, agribusinesses and even Amazon.

Sanders promised as president he would address concentration and monopolies in agriculture, too, in order to sustain family farms.