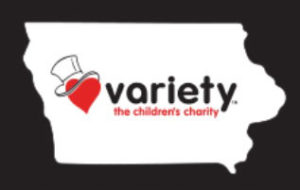 The annual Variety Club of Iowa telethon airs in central Iowa this weekend.

The telethon will also feature a host of familiar faces, entertainers from across the U.S., from England — and from Iowa. “We love Iowa native David Anthony Higgins, he’s formerly of ‘Ellen’ and ‘Mike and Molly,’ he comes every year,” Grandgeorge says. “The wonderful Emma Sams of ‘General Hospital’ fame joins us as well. Tony Hatch is another favorite. He wrote all of Petula Clark’s songs like the iconic song, ‘Downtown’.”

The telethon has come a long way since it first aired in the mid-1970s when the funds were used for the prenatal unit at Blank Children’s Hospital in Des Moines. Last year’s telethon raised $4.1 million for the Variety Club.  “One of our main programs is our grant program and we award grants throughout the state of Iowa to other children’s charities,” Grandgeorge says. “We just do stuff in all counties.”

The Iowa charity was founded in 1937 and since the inception of the telethon in 1975, Variety Iowa has raised more than $113 million to improve the lives of children throughout Iowa. The telethon will air on WOI-TV in Des Moines from 7 P.M. to midnight on Saturday and from 7 A.M. until 7 P.M. on Sunday. It will also stream live at www.varietyiowa.com.