You are here: Home / News / Report says most Iowans ever in workforce as unemployment rate holds 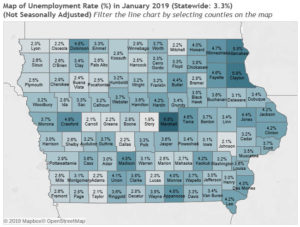 Iowa Workforce Development reports the state unemployment rate did not change in January.

The rate held at 2.4% and has been at that level since October. The Workforce Development report says the number of Iowans in the workforce is the highest it has been in the history of the state at 1,654,400. That’s an increase of 3,200 workers in January.

The report says the education sector added 700 jobs in January, and manufacturing firms added 500.
The construction industry did lose 400 jobs in January– the third straight monthly loss — and professional and business services lost 400. But the loses were offset by job gains, and Iowa is tied with New Hampshire for the lowest unemployment in the nation.

The national unemployment rate in January was 4%.