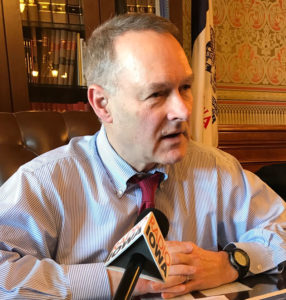 The state treasurer says he was “kept in the dark” for too long about an agreement to pay more than $4 million to two women who say a state agency director sexually harassed them.

State Treasurer Michael Fitzgerald and two other members of a state board approved paying those legal settlements last month.

“I don’t want to be a rubber stamp,” Fitzgerald said today. “…I think Iowans want everything to be transparent and open.”

Fitzgerald said while he got notice of the deal in February, a recent Associated Press report indicates the governor gave the go-ahead to the attorney general’s office just before the election to settle one lawsuit rather than have the allegations against a former political ally aired in open court.

“Sweep it under the rug, if you will,” Fitzgerald said. “…The governor should have recused herself from any involvement in the settlement of that case.”

The state solicitor general today said politics did not play a role in the decision and it was in the best interest of the state to settle the cases surrounding Dave Jamison. He’s the Iowa Finance Authority director who Governor Kim Reynolds fired last year after allegations of misconduct first surfaced.

Today, Fitzgerald and the other members of the State Appeal Board approved paying $2.3 million to a former prison guard who says she was retaliated against after she filed a sexual harassment lawsuit. Last month, the same board agreed to pay Kristine Sink more than $1.5 million to settle her original sexual harassment case. Fitzgerald said he’s worried “there’s a real problem” in state government when it comes to workplace misconduct.

“I don’t think it’s a problem of the employees. Who are the managers?” Fitzgerald asked. “How are they hiring these managers?”

Governor Reynolds has said she has a “zero tolerance” policy on sexual harassment and last year she ordered every state employee to complete a session outlining what’s considered inappropriate behavior in the workplace.