You are here: Home / News / Flooding could impact work on new I-74 bridge at Bettendorf 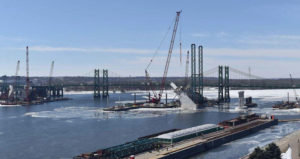 The I-74 bridge under construction.

The risk of flooding on the Mississippi River could cause further delays of the new $1.2 billion Interstate 74 bridge under construction between Bettendorf, Iowa and Moline, Illinois.

Almost two years after breaking ground, Iowa DOT construction engineer Doug McDonald says they’re starting to put up the steel sections that will form the arches, but it’s a time-consuming process. “We’re hoping the actual arch can meet in the middle and be ready to hang the deck on it in the May-to-June timeframe,” McDonald says. “We’re just not sure how long it’s going to take them to bolt those pieces up. Some of those connections have over a thousand bolts to bolt one piece of the arch to the other.”

It’s a true arch bridge design with what engineers call, “a basket handle arch.” Extreme cold and snowfall have caused minor delays, as did flooding last year, while forecasters say the risk of major flooding on the Mississippi this spring is high.  McDonald says, “The biggest problem with the flood 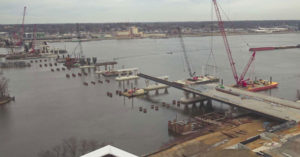 that the contractors have is the velocity of the water in the river increases and they have a hard time stabilizing the barges so they can work off of them.”

The steel pieces of the arch range in length from 36 to 60 feet, and the first one weighs about 250,000 pounds. Contractors are also ready to resume widening I-74 in Bettendorf and Moline from four lanes to six, which will cause detours and delays. The original I-74 bridge, which is still in use for the westbound lanes, was completed in 1935. The eastbound bridge opened in 1960.