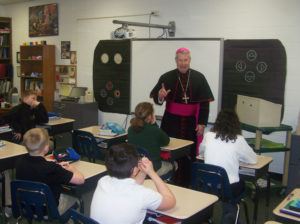 The Bishop of the Catholic Diocese of Sioux City, Walker Nickless, says most of the feedback he’s getting from people after the release of the names of priests involved in sex abuse cases involving minors in the Dioscese has been positive.

The names of 28 priests were released two weeks ago. “We presented our list for a couple of reasons,” Nickless says. “One of them was to let the victims know, even if it was years and years ago, that we believe them and that this priest did do something wrong. We want them to know that we know that and to encourage other victims to come forward.”

Some of the abuse allegations date back decades. Twenty-two of the 28 priests on the list have died. The remaining six men named are no longer priests and only one is still living in Iowa.  Nickless says, “We don’t want to dwell on this forever and most of the people who have responded to me say, ‘Thank you, Bishop, for doing this and let’s move on, we’ve gotta’ get over this,’ and I couldn’t agree with them more.”

Nickless visited Sioux City’s Gehlen Catholic School on Monday to answer questions from sixth graders. One student asked the bishop about the Church’s role in politics. Nickless responded that they don’t talk about particular candidates, but they do discuss the issues they stand for.
“One of the most important issues for Catholics and many, many other people is pro-life and how we can defend helpless, innocent life, especially in the womb,” Nickless says, “but also at the end of life, respecting the dignity of those who are elderly and sick or suffering in any way.”

The bishop was also asked about eating fish during Lent. He admitted that as the son of a meat butcher, he doesn’t enjoy eating fish and it can be a real sacrifice. Nickless says he makes an effort to visit all 16 Catholic schools in the diocese, especially during National Catholic Schools Week at the end of January.