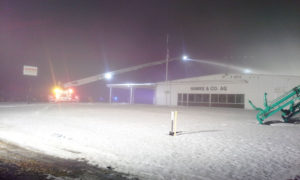 Firefighters pour water on the fire at Hawke and Company Ag.

Sioux County Sheriff’s Deputy Nate Huisinga says the call came in about 3:20 a.m. at Hawke and Company Ag on the outskirts of Alton.
“There was flames coming through the roof of the building and as the morning went on, they got that under control,” Huisinga says. “Five fire departments are here assisting and at this point, it looks like they have the fire contained.”

The business was closed at the time the fire broke out. No injuries are reported. Deputy Huisinga says the rain showers weren’t exactly a benefit.
“At this point, it’s probably more of a hindrance than it is helping as the conditions aren’t real nice out here,” Huisinga says. “Looks like we’ll have another rain shower go through and hopefully get a little break in the rain.”

There’s no word yet on what may’ve caused the fire.