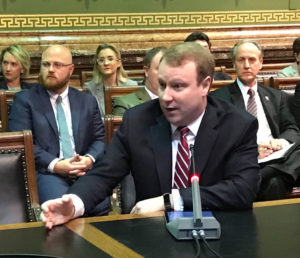 Proposed limits on city and county property tax increases were the subject of a public hearing at the Iowa capitol this morning. Kendall Kruise of Huxley told lawmakers he and his wife would like to buy a home, but property taxes are a “major concern.”

The tentative plan under consideration in the Iowa House would limit the increase in property tax payments to two percent. Residents could petition for a referendum in their city or county if increases would be above two percent. James Fitts, Sr., of Urbandale said the property taxes on his home have doubled since 1993.

“What I would suggest you folks do is scrap all of your tax laws and start again and make them reasonable,” Fitts said. “There are a lot of people in this state that are old like I am — I’m an old guy — but they can’t afford the taxes they’re paying and that, to me, is criminal.”

Robert Palmer of the Iowa League of Cities said a one-size-fits-all approach may not work for cities that are losing population as well as growing cities struggling to extend services to new residents and businesses.

“We need something that is fair, flexible so it can fit the variety of cities and certainly predictable, so that like homeowners and other residents and every person in the state of Iowa so we can plan into the future, so we can make the right financial decisions,” Palmer said.

“I don’t think county supervisors get any particular joy from asking their friends and neighbors to pay their property taxes, especially if that burden might go up year to year,” Beenken said, “but we live in a society where everyone chips in to pay for those services that people want and depend on.”

According to the Iowa Farm Bureau Federation, home owners, farmers and businesses will pay $5.75 billion in property taxes this year.

(This story was updated at 9:26 p.m with new information about the referendum option.)