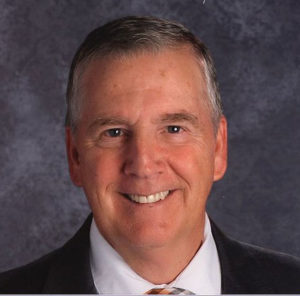 The Iowa High School Athletic Association will have a new leader in July.

The board of the organization which oversees boys high school sports in Iowa has named Cedar Rapids Xavier president Tom Keating to be its sixth executive director. Keating replaces Alan Beste who is retiring.

The IHSAA says Keating is Philadelphia native who began teaching and coaching in Maxwell in 1977. He moved to Dubuque Wahlert in 1980 as teacher, coach, and activities director and won 11 state volleyball championships there as the head coach. He was named NFHS National Coach of the Year for volleyball in 2003.

He became a principal at Xavier in 2004 and was named the National Catholic Educational Association’s Educator of the Year in 201. He moved up to become president of the school in 2018.

(Photo from the IHSAA)