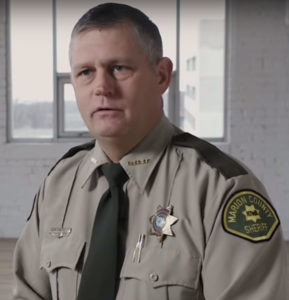 The Iowa State Association of Counties has released a video to highlight the dilemmas many Iowans face trying to find mental health services. It starts with the voices of Mary Neubauer and Larry Loss of Clive, the parents of a boy named Sergei.

“It quickly became evident that he needed longer term help if he were to recover from his illness and there simply wasn’t any,” Neubauer said. Loss adds: “We’re just parents trying to find help for our son.”

Sergei Neubauer took his own life in September of 2017. Marion County Sheriff Jason Sandholdt is another voice in the video. He was at the statehouse yesterday along with officials from other counties, urging lawmakers to find long-term funding for services, especially for children.

“I struggle at three o’clock in the morning when a mom and dad call me and they say: ‘My 14-year-old son or daughter is suicidal…What should I do, sheriff?” he said. “For me to say: ‘Well, you can go to the ER and you might have to sit there for a couple of days until we find them a bed,’ that’s not good service.”

Suzanne Watson, CEO of the Southwest Iowa Mental Health Disabilities Region covering nine counties, has worked in the system for 25 years and has seen several attempts to find funding for mental health services.

“I think we’ve put band-aids on it as we’ve gone, but I think it’s time that people realize that we need to get it a point where every region, every county can levy the amount of dollars that they really need to provide the best mental health system that we can,” said Watson, who was also at the statehouse yesterday for the lobbying effort.

Watson is also in the Iowa State Association of Counties video on the subject, which you can see below.