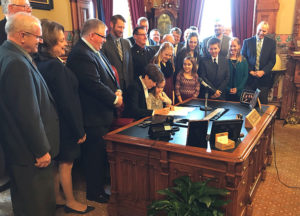 Governor Kim Reynolds has signed a bill into law that creates a new crime of lying to gain access to farms and livestock facilities with the intent to do financial or physical harm.

“Untrained, unapproved and unwanted items or people entering farms put farmers and the economy of the state at risk,” Reynolds said.

“This law will improve the security and safety of Iowa farmers by criminalizing the entrance of…individuals who use deceit to enter farms and intend to cause harm,” Reynolds said.

And Reynolds noted she approved it on National Ag Day.

“Iowa’s farmers are known for the commitment to doing the right thing, being innovative entrepreneurs and working hard every day, rain or shine,” Reynolds says.

Two months ago, a federal judge ruled a similar state law was unconstitutional. This week Republicans and a few Democrats in the legislature approved a new version that’s modeled after parts of an Idaho law which has survived one court challenge. Critics of the new Iowa law say “false speech” is still protected by the First Amendment. Many opponents call it the “ag gag” law, charging it prevents whistleblowers and consumer advocates from disclosing animal abuse.

(Photo courtesy of the Governor’s office)