You are here: Home / Sports / Drake’s Hittner named Valley player of the year 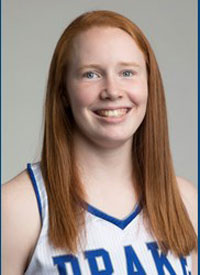 For the second-consecutive season, Drake University junior Becca Hittner is the Jackie Stiles Missouri Valley Conference Women’s Basketball Player of the Year while senior Sammie Bachrodt is the MVC Defensive Player of the Year.

The pair along with Drake’s other MVC award winners were presented their awards at a ceremony on the opening night of the 2019 MVC Tournament at Moline’s TaxSlayer Center.

Hittner is the first Bulldog to be named the conference player of the year twice since Drake legend Wanda Ford in 1985 and 1986. She is the first MVC player to win the award twice since Kristi Cirone of Illinois State claimed the award three times in 2007, 2008 and 2009. Cirone, Ford, Hittner, Christy Neneman of Creighton (2002 & 2003) and Jackie Stiles of Missouri State (1999, 2000, 2001) are the only multiple player of the year winners in conference history.

Hittner is scoring a league-best 19.9 points per game while her name is among the MVC leaders in several other statistical categories, including three-point percentage (39.9, 3rd), field goal percentage (48.4, 4th), free throw percentage (81.6, 5th) and rebounding (5.2, 14th). She and teammate Sara Rhine have a league-best 14 20-point plus scoring games, and Hittner has posted a league-best four 30-point plus scoring games. Hittner scored in double digits in 27-of-30 games and is the No. 3 active scorer in the league with 1,490 points. On Wednesday, she was named to the All-MVC First Team for the third-consecutive season and joins former standout Lizzy Wendell as the only Bulldogs to earn All-MVC First Team honors in each of their first three seasons.

An excellent student, Hittner, who holds a 3.96 GPA in marketing, was selected to the Google Cloud (CoSIDA) Academic All-American Third Team, to the MVC Scholar-Athlete First Team and was named MVC Scholar-Athlete of the Week during the regular season.

Bachrodt, who was also named MVC Defensive Player of the Year in 2018, is the only Bulldog to be named the top defensive player in the conference. She is a two-time All-MVC First Team selection and also earned All-MVC Honorable Mention honors in 2017. Bachrodt, who has started all 130 games in her career, is averaging great all-around number of 9.5 points, 3.7 rebounds, 3.3 assists and a league-high 2.4 steals per game in her final season. With 272 career steals, Bachrodt needs three more to break Kay Riek’s all-time record that has stood since 1984.

Among the MVC leaders, Bachrodt is tied for fifth in three-point percentage at 37.7 and is 15th in field goal percentage at 42.6. A three-time MVC All-Defensive Team honoree, she and Linda Sayavongchonh (2003, 2004, 2005) are the only Bulldogs to be picked to the MVC All-Defensive Team three times. Bachrodt has posted impressive all-around career numbers of 1,151 points, 371 assists, 571 rebounds while shooting 38.2 percent from three, 44.3 percent from the floor and 78.6 percent from the free throw line.

Drake is the top seed at this week’s MVC Tournament at the TaxSlayer Center in Moline, Ill. The Bulldogs will play either No. 8 Indiana State or No. 9 Valparaiso on Friday at 12 p.m.