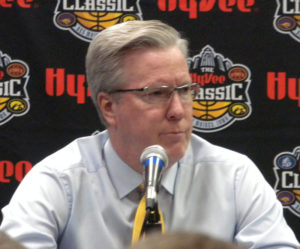 A record-setting performance propelled the sixth-seeded University of Iowa men’s basketball team on to the Big Ten Tournament quarterfinals for the first time since 2013.

The Hawkeyes set or tied three school Big Ten Tournament records to run 11th-seeded Illinois out of the United Center on Thursday night in a dominating 83-62 victory. It was the program’s largest margin of victory in a Big Ten Tournament game.

Iowa set a school tournament record with 12 3-point field goals and had a record 25 assists. The Hawkeyes’ 31 field goals tied a program record set in 2002.

“I was proud of our guards,” said senior Nicholas Baer. “We were able to get good shots, and we were knocking them down.”

The Hawkeyes shot 51.7 percent in the game, making 31-of-60 field goals and connected on 12-of-23 3-point attempts. Seven different players made at least one with Baer stealing the show.

The forward led Iowa with 17 points, coming on a career-best 5-of-6 night from 3-point range. Freshman Joe Wieskamp had 13 points and a team-high seven rebounds, junior Tyler Cook scored 12 points and tied a career-high with six assists, while junior Ryan Kriener added 11 off the bench.

The Hawkeye spurt extended to 17-6, as Iowa built a 47-35 less than four minutes into the second half. Amongst the run was the game highlight, a one-handed flush from Cook off an assist from Bohannon on an inbounds pass.

Illinois closed the gap to 47-40 on a Tevian Jones 3-pointer before Connor McCaffery had the answer and Baer and Kriener followed with two more 3-pointers, giving the Hawkeyes a 58-42 lead with 12:15 to play.

The 3s kept falling and the Hawkeyes’ lead kept growing. Iowa pushed its lead to 68-47 on Baer’s fifth triple and Luka Garza joined the party, giving the Hawkeyes a 71-47 lead with 7:48 remaining.

Illinois had a higher team field goal percentage (52 percent to Iowa’s 51.7), but the Illini committed 15 turnovers, leading to 24 Iowa points.

Giorgi Bezhanishvili led a group of four Illini players in double figures with 12 points on 6-of-7 shooting.