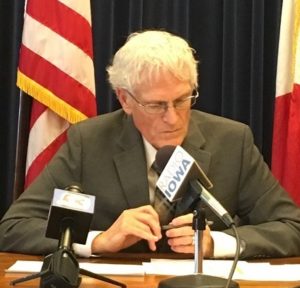 A panel that estimates how much tax revenue the state of Iowa will collect predicts a slight slow down in the next budgeting year that starts July 1.

Dave Roederer, the governor’s budget director, says he and the other two members of the panel know there’s a recession ahead, they just don’t know when.

“It’s kind of like we’re heard for how many weeks that someday it’s going to quit snowing and so, you know what, it’s going to happen. We just don’t know when it’s going to happen,” Roederer says. “…We still have employers in this state and in the rest of the country that are trying to hire additional employees, so that’s always kind of an indicator as well.”

The State Revenue Estimating Conference predicts lawmakers will have about $20 million less to work for next year’s budget. That won’t impact budgeting right now because Republican leaders in the House and Senate already were planning to spend significantly less than the total revenue estimate released today.

In each of the past two years, lawmakers had to make mid-year cuts in the state budget, but current state tax receipts are steady and cuts are not necessary.