You are here: Home / Education / U.S. Education Secretary in Iowa to tout her ‘school choice’ plan 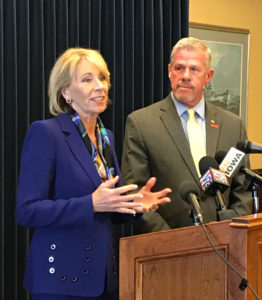 Betsy DeVos, the U.S. Secretary of Education, was in Iowa today, touting a plan that would give federal tax breaks to individuals and corporations making donations to private school scholarships “to create new opportunities and new choices for students and their families to prepare them for meaningful adult lives and futures.”

“This initiative is really meant not to hurt anything, but to really help all students, particularly those who aren’t empowered with resources to be able to make the choices that they need to make for their futures,” DeVos said.

It is unlikely congress will create the “Education Freedom Scholarships” DeVos is touting. The conservative Heritage Foundation has warned the plan complicates the tax code and might open the door to more federal regulation of private schools. In addition, Democrats who control the U.S. House say they won’t “waste their time on a plan that would undermine public schools.”

“I actually have great optimism that there are a number of Democrat members that are actually supportive of and favorable to this,” DeVos told Iowa reporters this afternoon. “Many of them are from areas where programs already exist in their states and their constituents are benefiting.”

DeVos met privately with Governor Kim Reynolds and about a dozen people in the statehouse, then the education secretary spoke with reporters. Public school advocates like Matt Sinovic of Progress Iowa denounced the gathering.

“I think it’s despicable that you would have the highest-ranking education official in the country come into our state and exclude the public when they’re talking about potentially undermining public education funding,” Sinovic said.

The top-ranking Democrat on the Education Committee in the Iowa House says if Governor Reynolds is truly interested in improving Iowa schools, she needs to include public school teachers and parents in the conversation.