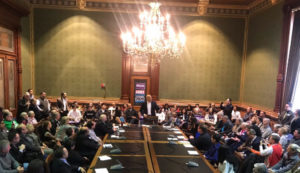 Booker, a New Jersey Senator, spoke this morning at a forum organized by the Iowa Asian Latino Coalition and the League of United Latin American Citizens. Christian Ucles, a member of the group, asked Booker about “right-wing terrorism.”

“The next administration needs to take…more tactics,” Ucles said, “especially with what we’ve seen over the past couple of years with attacks in our communities.”

Booker replied that the majority of the terrorist attacks that have occurred after 9/11 have been committed by “right-wing extremist groups.”

“This toxin, this viral evil,” Booker said, “we don’t have a monopoly in America. Look what happened in New Zealand.”

Forty-nine people were killed in shootings at two mosques in New Zealand Friday. The man who’s been charged with the shootings made a white nationalist hand sign as he appeared in court today.

Booker told the crowd gathered in the Iowa Capitol this morning that if he’s elected president, his Department of Justice would investigate hate organizations.

The other Democratic presidential candidates campaigning in Iowa this weekend have also denounced the violence in New Zealand. Former Texas Congressman Beto O’Rourke did not mention President Trump by name, but he said American leadership “must call out this hatred, this Islamophobia” and address the “larger disease of intolerance.” Minnesota Senator Amy Klobuchar said in “this dark moment, we must stand up for our Muslim community.”