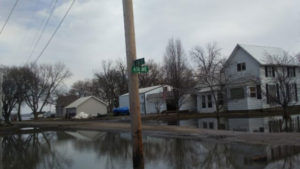 Residents of Hornick were able to see their flooded homes Sunday.

Residents of flood-striken Hornick were allowed back in the western Iowa town for a few hours today so they could survey damage to their homes. Electricity to the town is still turned off, so residents had to be out before sunset.

Dale Ronfeldt is a volunteer firefighter who has lived in Hornick since 1979. He allowed local media into his home which still has water in the basement.

“I’ve got about four feet of water,” he said. “It is sewer back-up, but 99 percent pure water because of how inundated the sewer plant got.”

The last major flooding in Hornick happened in 1960. After a flood threatened the community in 1996, the town constructed a dike to protect the town. 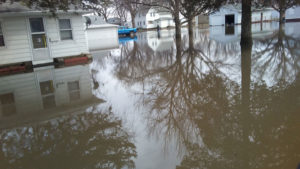 “Every year we have a scare of a flood and we make preparations and we do this and we do that…but we never know quite how far to go,” Ronfeldt said. “This time we had enough advance warning, but you get cried wolf so many times tht you don’t know if it’s going to happen or not. This time it was real and we paid for it.”

Ronfeldt is thankful for the help he and other residents have received so far, but he expects many will never return to live in Hornick, including an older neighbor:

“He’s not going to rebuild and I’ve heard that from a few others,” Ronfeldt says.

The town’s water supply was not swamped by flood waters, but crews from MidAmerican Energy were in Hornick Sunday to start restoring power where floodwaters had receded.