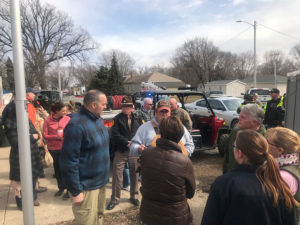 “I continue to be just overwhelmed and impressed and grateful to our emergency managers, our EMS, our first responders, our volunteers, just the community as a whole,” Reynolds told reporters.

She started in Missouri Valley, then traveled north to the Woodbury County town of Hornick. Many streets were still flooded.

“We were on the ground to understand what was going on, to make sure we were meeting the needs, to make sure the communication and coordination was taking place,” Reynolds said, “as well as making sure that we’re assessing the damage as we move forward with the recovery.” 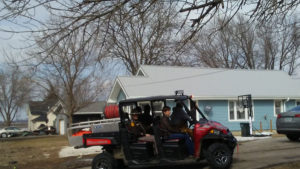 The governor went inside a few of the homes in Hornick, some still with several feet of water in their basements.

“The water has started to recede just a little bit,” Reynolds said. “I think one of the homes that we toured it had gone down a foot since its high-water mark, but they still have a long ways to go and they know that.”

Thirty-eight Iowa counties are included in the governor’s disaster declaration for this latest round of flooding. Reynolds will tour flood damage in Hamburg, Pacific Junction and Montezuma on Monday.