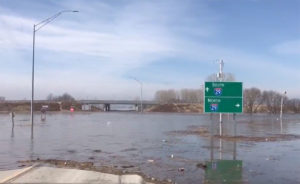 “Catastrophic devastation” is how Iowa Governor Kim Reynolds describes the carnage from the second major flood along the Missouri River within a decade.

“We’ve got towns that are shut down. We’ve got businesses that have been impacted. We’ve got individuals that are moving. We’ve got hospitals that are being shut down and the water supply,” Reynolds said. “Iowans are hearty and we’re tough and we know how to take care of ourselves, but after several times of this happening, it’s just ‘enough is enough.'”

Reynolds toured flood-impacted areas of southwest Iowa today, with stops in Council Bluffs, Glenwood, Pacific Junction and Hamburg. While in Hamburg, Mayor Cathy Crain told Reynolds citizens fought valiantly, but water seeped through barriers and swamped all but the northern portion of the community.

Flooding not only knocked out the city’s water plant, but also Hamburg’s City Hall, fire station and almost all the businesses in the community. The mayor said virtually all the equipment the city owned is gone.

“We lost everything. We have no equipment…We don’t even have a lawnmower, but look like leather. O.K.? We’re tough. We’re going to be able to do this,” she said. “We have two pickups left and a skid loader.”

Governor Reynolds met with officials from Hamburg and Fremont County inside an elementary school that’s now serving as a temporary city hall. Reynolds also got updates on other communities such as Percival, where floodwaters entered the community this afternoon. She also heard concerns about how this latest flooding incident will impact the local farming community. Fremont County Supervisor Dustin Sheldon said many residents were still recovering from the floods of 2011.

“You’re going to lose a lot of farmers financially because they can’t recover from this. They’ve mortgaged farms, just now kind of getting back to where you can make a living again and here it happens again,” Sheldon said. “…What do we do?”

Sheldon and other officials say it’s time for federal flood control policies to change. Others expressed anger that federal officials forced the city to remove fortifications to a levee which helped protect Hamburg during the 2011 flooding. The governor indicated she intends to review that levee issue.

“To build something and then have them tell you, ‘You have to tear it down’ — I mean just the frustration. There seems to be no common sense,” Reynolds said. “There seems to be bureaucracy and red tape.”

Reynolds said the state will come up with a plan to rebuild and recover.

“We’ve got farmland that’s been impacted. We’ve got bridges that we have to replace. We’ve got secondary road system all across this state that’s being impacted by the flooding,” Reynolds said. “…We’ve got a long road ahead.”

Interstate 29 has been closed in southwest Iowa due to flooding. Rivers in other parts of the state are elevated and ice jams have been reported in places like the Cedar Rivers in Cedar Falls and the Iowa River in Iowa Falls. There were sandbagging efforts in Iowa Falls today to protect the city’s water supply.