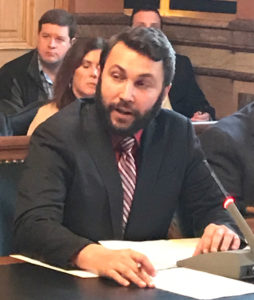 It appears a bill that would legalize and tax sports betting in Iowa may ban bets on individual Iowans playing on college and university teams. Representative Vicki Lensing of Iowa City says there were concerns some athletes might be pressured to miss a free throw or drop a pass in order to secure certain outcome.

“I’m not assuming that young athletes would be swayed, but we want to take away that temptation,” Lensing says. A House committee endorsed the proposal to ban bets on the performance of athletes in games or matches involving Iowa college teams today. Another panel in the House also has voted to tack the concept onto the sports betting bill.

Lensing says she’d prefer to ban bets on any college sport, but she’s pleased there’s momentum for at least banning bets on individuals playing on Iowa college and university teams.

“They are playing for the sport of the game and not to be influenced by money or anything else that might change how they play the game,” Lensing says.

Members of the House and Senate are considering a plan that would let the state-licensed casinos offer an “app” for placing bets on professional and college sports. Representative Bobby Kaufmann of Wilton is the House Republican who’s been assigned the task of rounding up “yes” votes for legalized sports betting.

“Historically, gambling bills are not partisan,” Kaufmann said during a House Ways and Means Committee meeting today. “This isn’t going to pass without bipartisan votes and so I commit today to work with all of you to ensure that we have the conversation that can make this palatable for everyone.”

The proposal calls for imposing a state tax on the bets placed on sporting events. Bill backers warn it won’t yield millions in extra revenue for the state, but will “police, regulate and tax” a currently illegal activity.