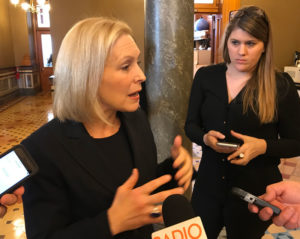 “Global climate change is the greatest threat to humanity that exists,” Gillibrand said Tuesday night. “It’s just true and so we, to deal with such a big problem, we need the kind of solutions that are as bold and as big as the problem that it is. I believe the Green New Deal is a very good start, but it’s not enough.”

The so-called “Green New Deal” unveiled this year by a New Yorker who’s a new member of the U.S. House calls for eliminating carbon emissions in a decade.

Gillibrand, who has represented New York in the House and Senate since 2007, spoke to dozens of people in Davenport last night. She due to make stops in Muscatine, Burlington, Ottumwa and Des Moines today.