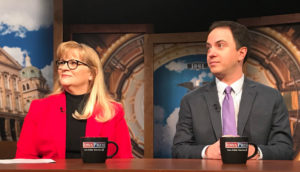 Key state officials say Iowans who aren’t in a flood zone today should prepare for flooding. 2018 was the second-wettest year on record and the ground is saturated — creating concerns as the snow in the Dakotas and Minnesota melts and drains south.

“If we get into a regime with active precipitation patterns, we could be in a very bad position,” State Climatologist Justin Glisan says.

Forecast models indicate there will be “above average precipitation” in the weeks ahead. The 147 years of weather records for Iowa show the atmosphere and surface temperatures are warming and that means it’s more likely to rain, according to Glisan.

“What we’re seeing over the past 30 years is that the intensity of precipitation events is increasing and we’re also seeing them lock into specific parts of the Midwest and even over Iowa,” Glisan says. “…You’re getting rainfall rates in which infrastructure can’t keep up.”

“We’re focused on the Missouri River right now, but there are a lot of the interior rivers that are high as well and there’s the potential for flooding on the Mississippi, so we are reaching out to those folks,” Flinn says. “Many of them are taking those proactive measures because when you lose a water system, that’s hard to recover from quickly.”

Flinn and Glisan made their comments late this morning during taping of the “Iowa Press” program that airs at 7:30 this evening on Iowa Public Television. This afternoon, Flinn is in a helicopter, flying over the flood zone in southwest Iowa with federal officials reviewing the state’s damage assessments.