You are here: Home / Fires/Accidents/Disasters / Forecast along with soggy ground could lead to more flooding 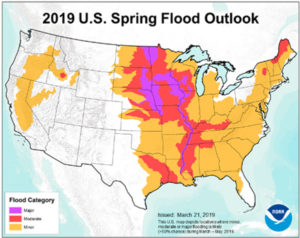 National forecasts see the potential for continued flooding across the country as we move further into spring.

DNR Hydrologist Tim Hall says it is hard to believe we had some extreme areas of drought in the state back in September. The wet fall washed any dry conditions in a trend that’s been seen across the country. “This is the first time in almost a decade that there is no drought in California. In fact — there’s almost no drought in the entire eastern half of the United States. As in zero,” Hall says.

The abundance of groundwater is usually welcomed in Iowa.  “We went into the winter with a pretty healthy level of soil moisture — which normally is a good thing — because that means when you get out to do the next year’s planting, you’ve got moisture to build of off,” according to Hall. “But once that moisture gets locked in for the winter, that combined with a lot of snowfall, and some untimely rain, has led to some significant flooding conditions.”

The water balance is now on the wrong side. “We’re in a tenuous spot. If we get a heavy dose of rain, we could see some at least localize, if not some large scale flood issues,” Hall says. He says the entire state could use some dry days to drain. “Even just a few weeks of dry weather would really, really help. The water can drain out of the stream system fairly quickly — and that’ll give the chance for the tile drains to drain the soil profile where the land has tile under it,” Hall says. “Unfortunately we are coming into the beginning of the time period where we historically have a lot of moisture that comes. April May and June.”

Hall says we can only hope there are enough dry days to make some room in the waterways to handle any of the spring rains.