You are here: Home / News / Northey overwhelmed by scope of flood damage along Missouri River 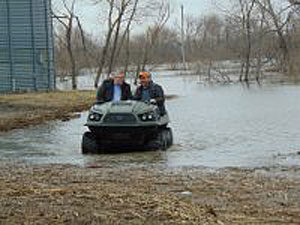 Iowa’s former secretary of agriculture is back in the state to survey flood damage and talk to displaced residents, especially farmers who have had many hundreds of acres underwater.

Bill Northey, now an undersecretary at the U.S.D.A., says it was “mind-boggling” to tour the disaster areas of water-logged southwest Iowa and northwest Missouri on Thursday.  “It’s devastating. We’ve talked to producers. This is one of the worst they’ve had,” Northey says. “We need to be able to work with our partners in other parts of the federal government to say how do we need to address the overall issue going forward, also, how do we need to respond to help people right now?”

Northey and Iowa Senator Chuck Grassley plan to conduct a town hall meeting at the Mills County Fairgrounds in Hamburg this afternoon at 1:30 p.m. Northey says he worries a wrecked levee system along the Missouri River is leaving the area vulnerable to more flooding, perhaps very soon. He says he knows fields are unprotected, as farmers wait for the water to recede. 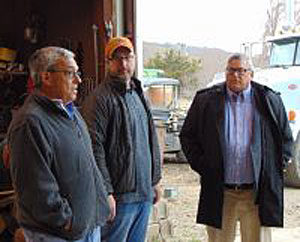 more normal situation,” Northey says. “But it could be worse before it gets better as well.” Northey says he’s overwhelmed by the scope of the damage he’s witnessing in the region, noting, flooding is always devastating but he wasn’t prepared for this.

“It’s just mind-boggling to see it in person,” Northey says. “How much water there is and how much water has to get off of here to eventually make this land such that they can get out there and get some planting done.” Northey says he has two messages for his boss, U.S. Ag Secretary Sonny Perdue. First, farmers need help to recover — now, and second, changes are needed in how the Missouri River is managed to prevent another repeat.