You are here: Home / News / ‘The Art of Racing in the Rain’ author to headline Des Moines Book Festival (audio) 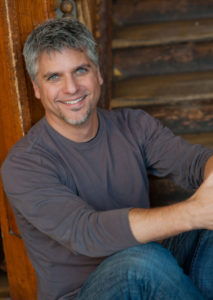 The author whose book “The Art of Racing in the Rain” spent three years on the New York Times best-seller list is one of the featured speakers at this weekend’s Des Moines Book Festival.

Garth Stein says he’ll be flying from Iowa to Hollywood on Monday for the first private screening of the movie based on his novel. Stein says he had no input on the film’s creative process, but applauds the casting of Kevin Costner as the voice of his main character, Enzo, a Labrador Retriever.

“They’re going to have to change things, I get that,” Stein says. “Hopefully, they do it in a way that keeps the spirit of the book. I warned them. I said, ‘There are big fans of Enzo out there,’ and if they mess this up, it’s on them, not on me, so, they understand the weight behind this.” The film, which isn’t scheduled for release until September, also stars Milo Ventimiglia of TV’s “This is Us,” and film actress Amanda Seyfried .

“The Art of Racing in the Rain” came out in 2008 and has since been translated into 35 languages and sold more than six-million copies. While he’s eternally gratified the book was so well-received, Stein could not say why the story resonated so strongly with so many people. “If you want to read it on the surface and say, ‘Oh, it’s a story of a dog and his family,’ okay,” Stein says, “but if you really delve into what Enzo is saying about reincarnation, about manifestation, about self-reliance, all of these sorts of themes, there’s some depth to that.”

Before he became a novelist, the 54-year-old Seattle resident says he dabbled in several career paths. He spent a few years working on a cruise ship, he worked for a Broadway producer, he was a teacher, an amateur race car driver, and he directed documentary films. Stein says he advises aspiring novelists to follow suit and get out there before going in to try and create. “In order to write about the world and write about life, you really have to have experienced some of the world and some of life,” Stein says. “I think part of the fun of writing is the journey of generating stories.”

Stein’s most recent book, “A Sudden Light,” came out in 2014 and did well, but not nearly as well as “The Art of Racing in the Rain.” He says he’s not concerned with trying to make lightning strike twice and continues striving just to tell good stories. “I’m working on a new book right now about two 87-year-old ladies who become new best friends and set about to save the world,” Stein says. “Maybe people will really enjoy that. We’ll see. All I can say is that as a writer, I’m never going to put a book out that isn’t the best book I could possibly have written and my readers and fans can trust me on that.”

Stein is scheduled to speak at noon on Saturday at the Des Moines Book Festival. Admission is free. The fest will feature a series of local and Iowa authors as well as other big-name writers, including Susan Orlean, who wrote “The Library Book” and Nnedi Okorafor, the author of Marvel’s “Black Panther.”