You are here: Home / News / Iowa National Guard leader to retire after 40 years of service 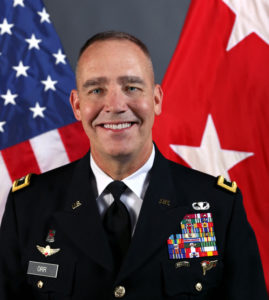 The leader of the Iowa National Guard has announced plans to retire on May 1st.

Major General Tim Orr was appointed to the job by then Governor Chet Culver in March of 2009. “I’ve been serving for 40 years in the Iowa National Guard and 10 years as the Adjutant General. You reach a point where it is time for the organization to move to the next chapter — and for me to move to other opportunities that are out there,” Orr told Radio Iowa.

The 57-year-old Orr joined the Iowa National Guard in 1978 after graduating from Boone High School. He wasn’t thinking then about moving from being an enlisted man to wearing stars on his shoulders. “I was looking near term, I was going to go to college to be a school teacher, which I did become and taught for a while. So, I was a part-time guard soldier serving in both capacities as a civilian and the military. I never though to be honest with you that I would get to a colonel’s rank,” Orr says.

Orr rose to the rank of staff sergeant and then decided to stay in the guard and become an officer. The top job still wasn’t something he considered.
“I never thought that I’d be the adjutant general — I just didn’t see that capability out there,” Orr says. “Probably nearsighted on my part.”

Orr says he got a lot of support from those around him and that allowed him to continue moving up the ranks. His tenure included a time where the guard continued to take more of an active role in the military conflicts around the world. That included the state’s largest federal mobilization since World War Two in 2009-2010 when the 2nd Brigade Combat Team, 34th Infantry Division, deployed 2,800 Soldiers to Afghanistan.

His time as leader saw the mobilization, deployment and training of another 4,200 soldiers and airmen in support of overseas operations. Orr says the hardest part about being in the Iowa National Guard is losing fellow soldiers. “In the Guard it is a little different from the active component. Casualties are all the same and the loss is terrible,” Orr says. “But in these cases, some of these folks I knew personally. Probably the one in my book that stands out the most to me is Sergeant Major Gabbard. Marilynn Gabbard was her name.”

Gabbard was a fellow Boone High School graduate and friend of Orr’s who he work with in the National Guard. She died in a helicopter crash near Baghdad in 2007. Orr says he had to give too many folded American flags to family members during his time as the commander.  “A lot of our commanders overseas that have lost troops and airmen, they get back on the mission set, they have to. But in the active component they move on to different units. But our folks they come back — we have to deal with this — and so it is not a short recovery,” Orr explains . “We live with these, it’s part of our history, and they are part of where we go forth.”

Another big change in Orr’s tenure was the switch from the F-16 fighter jets in Des Moines to the drone, cyber defense squadrons, and intelligence groups at that base.  “I always regret that I’m the guy that lost the F-16’s, but I am not the only state or adjutant general that can say that,” Orr says. “But I am proud of the leadership and the involvement of the airmen to transition and accept the new mission set. Today we have an enduring mission set that will last for years to come.”

Among his other accomplishments: Orr started the State Partnership Program between the Iowa National Guard and the Kosovo Security Force, which led to the establishment of the first foreign consulate in Iowa, youth and college exchanges and numerous sister state and sister city relationships in communities across the state.  Orr also came up with the Home Base Iowa program to attract high quality veterans and their families to the state to continue their military service in the National Guard and help fill critical labor shortages at Iowa based employers.  He sold that program to former Governor Terry Branstad.

Orr says he is leaving the Iowa National Guard in good shape. He says the recruitment of new members is near 100 percent of its goal. “I think we have a great product and a great message to sell to our young people. You know, there’s money for school, there’s money for benefits, opportunity and a chance to make a difference,” according to Orr.

Orr’s wife Suzanne retired from the Iowan National Guard after 27 years, and he has one child attending the University of Iowa and one who is at the U.S. Air Force Academy. Orr says he looks forward to spending more time with his family in retirement, running triathlons,  doing some fishing and relaxing in a non-military setting before moving on to some new opportunity.