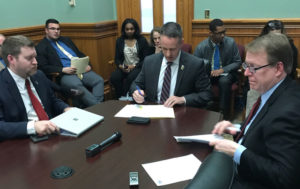 The governor’s proposed constitutional amendment to automatically restore voting rights to paroled felons has cleared an initial hurdle in the Iowa Senate, but it’s future is in doubt.

“Is that the right public policy, to have universal restoration of rights? I don’t think so,.” Senator Jake Chapman, a Republican from Adel, said during a senate subcommittee hearing this afternoon.

Key Republican senators like Chapman say the plan isn’t likely to clear a committee as currently written. Senator Dan Dawson, a Republican from Council Bluffs, said that likely means adding language to the proposed amendment so rapists, child molesters and anyone convicted of causing the death of someone else never get their voting rights restored.

“Pragmatically, the pathway forward — for this to be successful, there are going to have to be parameters,” Dawson said.

Ninety-five of the 100 members of the Iowa House endorsed the governor’s proposed constitutional amendment last week. Drew Klein of Americans for Prosperity is urging senators to vote for it, too, and then consider separate legislation to define which paroled felons would be eligible to vote.

“I think we can kind of help craft the framework for what that looks like,” Klein said during today’s subcommittee hearing, “but obviously there’s a timeline in the legislature…and I think it’s important to move this forward so that we can continue to have those conversations.”

If the Senate Judiciary Committee does not endorse the proposed constitutional amendment by this Friday, the matter is ineligible for debate for the rest of the 2019 legislative session.