You are here: Home / Fires/Accidents/Disasters / Grassley singles out Democrats who campaign in Iowa, voted against disaster relief 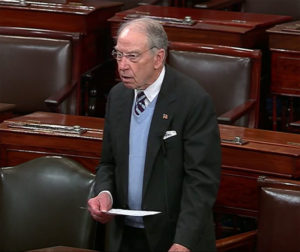 Iowa Senator Chuck Grassley is criticizing Democrats in the Senate who last night blocked consideration of a disaster relief package that included money for flood recovery in Iowa and across the Midwest.

Grassley, a Republican, says he’s “disappointed” in his colleagues, especially those who are running for president “who decry Washington political games.” Grassley says, “This is being done almost every weekend with people that are on the campaign trail in Iowa but then return to the capitol as senators only to play political games themselves when they voted ‘no’ about advancing disaster relief.”

The appropriations bill would have put $13.5 billion toward disaster relief, but Democrats opposed it, saying not enough money was being devoted to helping Puerto Rico. That island nation was hit by two hurricanes in 2017 and is still in the process of rebuilding.

“The disaster appropriations bill that I voted for in the Senate wouldn’t have left anyone in the lurch from Iowa to Puerto Rico,” Grassley says, “but Democrat poison pills will do exactly that.”

Damage from flooding this spring in Iowa is estimated near $1.6 billion. The vote for the disaster relief funding needed 60 votes to overcome a Democratic filibuster and failed with a tally of 49-to-44. “I hope my colleagues who voted against this much-needed relief will reconsider and they’ll have a chance to reconsider because (Mitch) McConnell, the majority leader, filed a motion to reconsider.”

It’s unclear when the disaster relief package will next come up for a vote.