You are here: Home / Crime / Courts / Stacyville man sentenced to jail for failing to clean up tire pile 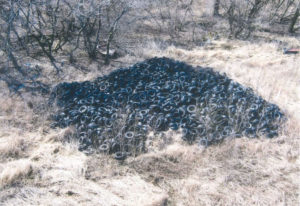 A Stacyville man will spend time in jail for failing to get rid of these tires.

A Mitchell County man is being sent to jail after failing to clean up thousands of tires from an illegal dump site.

Sixty-three-year-old Gary Eggers of Stacyville was accused of illegally storing and dumping waste tires in an unlicensed salvage yard on his property, with those tires eventually washing into a nearby creek and onto neighboring property.

Eggers was ordered in 2015 by the Iowa Department of Natural Resources to stop collecting tires and issued a $10,000 penalty. DNR authorities say Eggers continued his tire collection, with a district court judge ordering him to pay a $100,000 penalty and properly dispose all but 500 waste tires.

District Judge Christopher Foy recently found Eggers in contempt of court for not paying any of the penalties or following court instructions.

Eggers has been sentenced to 120 days in jail and must start his sentence on April 15th.