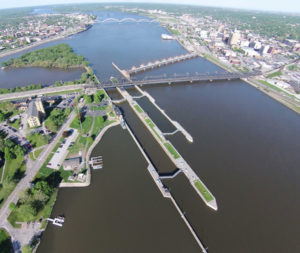 Flooding is forcing the U.S. Army Corps of Engineers to close seven locks on the Upper Mississippi River.

Allen Marshall, spokesman for the Corps’ Rock Island District, says lock closures on the river effectively stop all traffic, and unlike motorists who have options to avoid traffic jams, towboat pilots aren’t as lucky.  Marshall says, “There isn’t any detour on the river, so, once the lock is closed, if you’re in that pool above that lock, you’re kind of stuck.”

Lock 12 in Bellevue is closed upstream from the Quad Cities, along with six more downstream including Lock 16 at Muscatine, 17 at New Boston, 18 at Gladstone plus 20 through 22 at Canton, Quincy, and Saverton. Marshall says they’ll be closed at least a week or two and the timing depends a lot on the weather.

“Down at 20, 21, 22, they’re looking at beyond April 15th and some of these on the upper part of our area, Lock and Dam 11, that one’s not closed yet so we don’t have estimates on when they’d reopen,” Marshall says. “Some of the other ones that are closed, like Lock 12, they’re expecting that to reopen sometime after the 8th.”

The same goes for Locks 16, 17 and 18. In the Quad Cities, Lock 15 at Rock Island is still open, along with Lock 14 at LeClaire, 13 at Fulton, 11 at Dubuque, and 19 at Keokuk. The Corps of Engineers will close them when the water reaches specific stages, which are different at each location. In addition, the Coast Guard recommends recreational boaters avoid the Upper Mississippi. It has already closed the river south of Chester, Illinois.