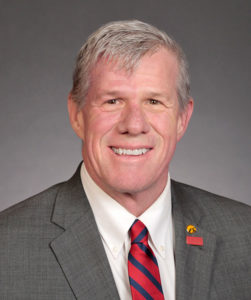 A senate committee has failed to take a vote on one of Governor Kim Reynolds’ top legislative priorities, permanently sidelining the plan for this year.

Last week, the Iowa House voted 95-2 in favor of a proposed constitutional amendment that would automatically restored felon voting rights once an inmate is paroled. Senator Brad Zaun, the Republican who is chairman of the Senate Judiciary Committee, said there weren’t enough Republican votes on his committee to pass it.

“I’m not saying that this won’t move next year, next session,” Zaun told reporters. “You know, there needs to be some conditions…No where are there any conversations about victims.”

The conditions Zaun and others envision adding are things like requiring a felon to repay restitution to victims and forever banning felons who’ve been convicted of murder, rape or child abuse from voting.

Governor Reynolds issued a written statement, saying she was “disappointed” in this “setback.” Reynolds said she “will not give up the fight for Iowans who deserve a second chance.”

Zaun said as a long-time lawmaker, he’s seen other governors have their priorities fail to advance in the legislature. Plus Zaun said it takes four years, at minimum, to get a constitutional amendment passed through the legislature and put on the ballot for voters to decide.

“It’s not the end of the world here,” Zaun said. “I mean…I assume that we will have the conversation a year from now, but for this particular session, obviously there’s not going to be a resolution.”

The Democratic leader in the senate called the situation “shameful” and pledged that Democrats will work with any willing Republican who wants to advance the governor’s priority. Senator Janet Petersen of Des Moines also called on the governor to issue a temporary executive order that would restore felon voting rights until a permanent policy can be enacted through the constitutional amendment.

Sara Craig Gongol, Governor Reynolds’ chief of staff, came into the senate committee room shortly after Zaun announced the governor’s proposal would not be voted upon, but she did not make a public comment.

A few moments later, the governor’s written statement was issued.

“There’s more work to do, but I am committed to getting this done,” Reynolds said.