You are here: Home / News / Axne letter to congressional leadership on flood relief 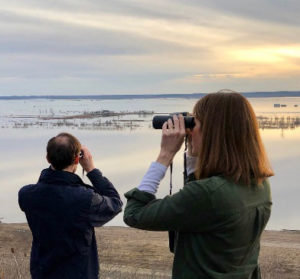 Axne surveying damage in Fremont County, just outside of Hamburg.

“There’s a lot of concern that towns might not come back from this,” Axne said during an interview with Radio Iowa. “…We’ve got a lot to manage here.”

Axne’s letter went to Democratic and Republicans leaders in both the House and Senate. Axne, a Democrat from West Des Moines, wrote that “now is not the time for political games” and congress should not turn its back on Americans “recovering from the devastating damage of natural disasters.”

Earlier this week, Democrats in the U.S. Senate blocked a vote on a disaster aid package as they seek more money for hurricane victims in Puerto Rico. Axne said congress must respond to the requests from local and state officials who are directly dealing with this spring’s flooding.

“Certainly, as the governor, indicated it is like an ocean out there,” Axne said. “There were white caps on some of the fields. That’s how deep the water is.”

Axne will be in three western Iowa counties tomorrow.

“We’ll be working with emergency management again, local election officials, stopping by shelters and visiting farms that have been under water,” Axne said of her stops in Mills, Fremont and Pottawattamie Counties.

Axne has joined the effort trying to expand USDA crop insurance for crops damaged in the field to also cover grain that’s been harvested and sitting in storage bins. Much of that grain in Mills and Fremont Counties has been spoiled by the flooding.

“There’s some outlay for our farmers that they’re not going to be able to get back unless we can get some specific language that would fit in with one of the programs that USDA offers,” Axne said. “I’m working on that and then, of course, working with Senators Grassley and Ernst. They’re trying to get things through the Senate. I’m coordinating here at the House, so that we can move this forward.”

Axne said during her trip to the flood zone last week she spent time with a 17-year-old in a shelter who fled his home with nothing more than the clothes he was wearing.