You are here: Home / News / Iowans and Nebraskans encouraged to pray for flood victims this Sunday 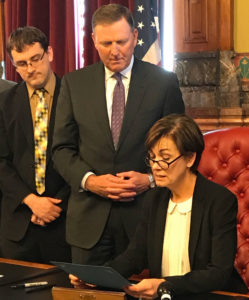 The governors of Iowa and Nebraska have declared this Sunday “a day of prayer” for flood victims. Governor Kim Reynolds said prayer can provide “peace and guidance” to those who’ve been profoundly affected by the weather conditions.

“Throughout out history, Iowans have united in prayer to God to ask for strength and steadfastness in times of difficulty,” Reynolds said this afternoon.

Reynolds signed a proclamation on the topic early this afternoon “and (encouraged) individuals to pray on their own or with others in an expression of faith and hope.”

Reynolds and a small group from the evangelical Christian group “The Family Leader” then bowed their heads in prayer in the governor’s office.

Reynolds spoke with reporters afterwards, mentioning the four huge levee breaches that must be fixed immediately, as water from the Missouri is still flowing into the area around Hamburg and Percival.

“The one breach specifically is about 72 feet deep and it’s four football-field-lengths wide, so 400 feet, so it’s enormous,” Reynolds said. “Just the rate that the water was coming into the Missouri (River) from the Platte (River), I mean when you think 300 cubic feet per second and higher, I mean, it just blew them out.”

Reynolds said it’s going to be a long spring and summer — and it’s time for congress to quit quarreling and pass a disaster relief package.

“They need to put politics aside and they need to realize that people are hurting,” Reynolds told reporters.

Reynolds singled out Democratic members of the U.S. Senate who are running for president who blocked a vote on a disaster aide package this week, seeking more aide to help Puerto Rico’s recovery from last year’s hurricane.

“We have people that are running for office that talk a lot about rural Iowa and really doing what they can to re-energize and revitalize,” Reynolds said. “Well, this is rural Iowa.”

Senate Majority Leader Jack Whitver, a Republican from Ankeny, said earlier today that the flooding is “devastating” and has created a “dire situation” for many Iowans.

“When these presidential candidates — U.S. senators from all around the country — come to Iowa, campaign as presidential candidates, ask Iowans for their vote…and they come to Iowa, they go to the floods, they get their photo ops, then they go back to D.C. and vote against the flood relief package for Iowa,” Whitver said during taping of Iowa Public Television’s “Iowa Press” program. “…Why are these people out here pandering for votes in Iowa by touring the floods and then they go turn their back on Iowans out in D.C.?”

Democrats in the U.S. senate are pressing to add $700 million to a disaster package that’s already passed the House, with much of that extra money going to hurricane victims in Puerto Rico as well as for rebuilding badly-damaged levees and water systems in the Midwest.