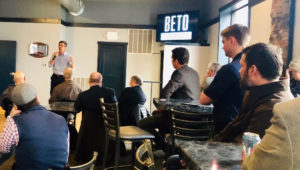 A tavern in Carroll opened early Thursday morning for his first event of the day.

“I am getting the feeling, 19 or 20 days into this race, that the people of Iowa take this very seriously,” O’Rourke said, drawing applause from the crowd.

O’Rourke began by talking about the flooding in western Iowa.

“From infrastructure that was not invested in, from climate change that is taking its toll, from a government that cannot yet pass full disaster relief funding,” O’Rourke said. “And, even if they do, it looks like it will not make up for the stored grain that has been damaged and spoiled in these floods.”

O’Rourke said some of those farmers had stored grain, hoping to sell it later after the Trump Administration settles its trade disputes with China.

“Rural America does not need handouts…It doesn’t need anybody’s sympathy or pity. It needs a partner,” O’Rourke said. “It needs a partner in the investment in infrastructure along the banks of the Missouri River.”

Lynne Genter of Rockwell City, who intends to review the records of all the Democratic candidates, drove to Carroll to see O’Rourke.

“I want a candidate that frankly will defend Iowa’s motto: ‘Our liberties we prize and our rights we will maintain,'” she said. “In today’s atmosphere, I think our rights are slowly being taken away.”

Genter asked O’Rourke about the abortion issue and O’Rourke said he will try to expand “common ground” about women’s health care, but O’Rourke said there are “perverse, unintended consequences” when a woman’s right to choose is restricted. He cited the closure of more than a quarter of the family planning clinics in Texas.