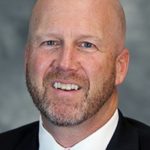 Former Loras College head basketball coach Brad Soderberg will be coaching in tonight’s NCAA National Title game in Minneapolis. He is a top assistant coach at Virginia for Tony Bennett. Soderberg was head coach at Loras in Dubuque from 1988 through 1993 He also had head coaching stints at South Dakota State, St. Louis University, and Lindenwood. Soderberg played for Tony Bennett’s father at Wisconsin-Stevens Point and later coached under Dick Bennett at Wisconsin, where he eventually was the interim head coach.

“The fact that I have been a head coach I think I have been a better assistant for Tony”, said Soderberg. “I know what he doesn’t need to hear and I don’t give him idle chatter.”

Soderberg says he is a “Division Three” guy at heart and always thinks back to his days at that level, including coaching at Loras. He also served a stint as the interim athletic director at Loras College in 2008.