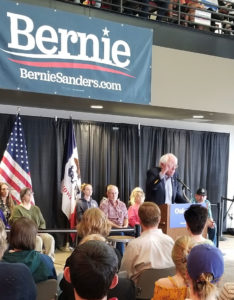 This past weekend Iowa Democratic Party leaders ratified their new plan for conducting and tabulating the results of the 2020 Iowa Caucuses and two of the party’s high-profile presidential candidates made a dozen campaign appearances in the state.

“I understand that people in their frustration, in their pain, voted for Donald Trump,” Sanders said. “I would just ask people to check the record and see what if he did what he said he would do.”

Later Sunday afternoon in Malcolm, Sanders joked he was nervous about coming back to Iowa because Trump said the noise from wind turbines causes cancer.

“I think it is not a healthy thing for this country that we have a president who is a pathological liar,” Sanders said, “who lies all of the time.”

“Resist the temptation to be divided by our differences by a president who excels at doing just that,” O’Rourke said, “who seeks to make us angry, keep us apart and make us afraid of one another.”

O’Rourke, speaking to a crowd in the University of Iowa’s Memorial Union, said the nation’s democratic institutions need to be revived and he called for passage of a new Voting Rights Act.

O’Rourke and Sanders are raising millions from tens of thousands of donors, putting them at the top of the campaigning fundraising leader board with California Senator Kamala Harris. As for who’ll be the leader next February on Caucus Night, Iowa Democratic Party officials for the first time will release a raw vote total and have “virtual” Caucuses beforehand for people who can’t attend the Caucus Night precinct meetings. The Iowa Democratic Party state central committee approved those details during its meeting on Saturday.