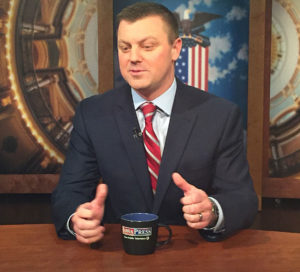 Senate Majority Leader Jack Whitver says based on his own experience, he has no concerns about Iowa college athletes being influenced to change a game’s outcome if sports betting is legalized in Iowa.

Whitver, a Republican from Ankeny, was a wide receiver for the Iowa State Cyclones from 1999 through 2003.

“I remember we sat down with compliance (staff in the athletic department) and they would show us videos of what happens to you if you try to shave points or try to throw a game and you get sent to prison,” Whitver said on Iowa Public Television’s “Iowa Press” program this weekend. “They really scared us into saying: ‘This isn’t even something that you should consider.'”

Bills eligible for debate in the Iowa House and in the Senate where Whitver is a leader would let the 19 state-licensed casinos collect bets on professional and collegiate sporting events through a smart phone app. The casinos’ sports betting operations then would be subject to a state tax of less than seven percent.

“If you go to an Iowa State or an Iowa game on a Saturday, there are bookies literally in the parking lot taking bets on their text or taking bets from the people at a tailgate on these games,” Whitver said. “And so the question is should we just ignore it and pretend that it doesn’t happen or should we legalize it and regulate it, so that if there are concerns and there is corruption happening, we have a better chance to find that and make sure that it doesn’t happen.”

The bills that have emerged at the statehouse would prevent bets on individual performances in college games happening in Iowa. That means you wouldn’t be able to bet on how many touchdowns a quarterback might throw or how many free throws a basketball player might miss. Whitver said he has no problem banning those kind of wagers — called “prop bets” — if it helps get the 26 votes he needs in the senate to make sports betting legal in Iowa.

“Illegal sports betting is happening every single day in the state of Iowa,” Whitver said. “All you have to do is pop on the radio this afternoon and listen to talk radio and they’re talking about point spreads and betting lines and all that.”