You are here: Home / News / This could be your last chance to see duct tape-loving ‘Red Green’ in Iowa (audio) 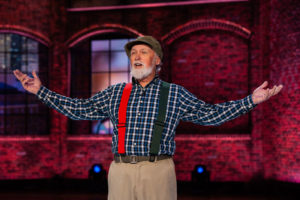 The Canadian comedian known globally for his role as the quirky handyman “Red Green” is planning to visit five Iowa cities for performances this month.

Steve Smith, who created the character and the TV program that ran for 15 seasons, says his one-man show isn’t a stand-up act, but follows the familiar antics of members of the fictional Possum Lodge in the deep woods of northwestern Ontario.

“It’s supposedly a lodge meeting so it starts with the salute and the oath,” Smith says. “I like telling stories and giving advice and some news. I don’t consider it in the standup field at all, especially this one. I’ve actually shot some new video and stuff for it which I refer to, so it’s more of an audio-visual presentation.”

Smith calls this his “This Could Be It!” tour, hinting it’s likely his last. The 73-year-old says he’s made a lot of mistakes in his long life, but adds, he knows when it’s time to go. “I ended my TV series when I felt that it would only get worse if I kept doing it and I’ve made several changes like that,” Smith says. “My sense now is that it’s time to hang up the touring hat. Ticket sales are the best they’ve ever been. People are excited to come say me, so I think that’s the time to say, ‘Thank you and adios!'”

Smith says he feels very at home in Iowa and has a kinship with Midwesterners, our feet-on-the-ground attitude and our rock-solid morals. After 300 episodes of the television show, a feature-length movie, several books and four comedy tours, Smith recognizes he’s incredibly fortunate his brand of humor became so popular.  “You’ve gotta’ admit, my program is very odd and I’m doing a very odd kind of comedy. Maybe it’s a throwback to the ’50s,” Smith says. “The thing is, if you like it, there’s almost nowhere you can find it. Everybody seems to be either angry or obscene or both and I’m not any of those things and people that enjoy that don’t have too many stores to go to.”

While the finale episode of “The Red Green Show” aired in 2006, it’s lived long in reruns on PBS. In an interview with Radio Iowa, Smith was asked if he still runs across people who don’t realize the TV show is no longer being produced. “Yes, I do,” Smith says, laughing. “I also find, this is my fourth tour and the average age of our audience has gotten younger with every tour, which is really odd, but what it is, it’s YouTube. There are kids who come out and they don’t know the show was ever on television. They only know it from the internet, so it’s a new world.”

This U.S. tour has 35 dates scheduled and promoters say 11 are already sold out. Smith will play the Adler Theatre in Davenport on Saturday (April 13th), Hoyt Sherman Place in Des Moines on Sunday the 14th, Five Flags Center in Dubuque on the 15th, the Bridge View Center in Ottumwa on the 16th, and Stevens Auditorium in Ames on the 17th.