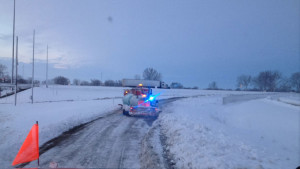 Lee Wilkinson is a top administrator for the Iowa DOT. “This was actually our most severe winter that I can recall. We have a winter severity index,” he says. “On a winter severity standpoint, this was the highest-rated winter we’ve had — at least since the early 2000s.”

The DOT has “salt sheds” placed around the state, so road crews can deal with hazardous highway conditions. It’s time to start buying salt now that prices are low and fill those sheds rather than buy salt in late fall when it’s more expensive. Wilkerson says the DOT needs about $9 million extra now to jump start that process, as the agency fell behind in buying salt last summer.

“This winter was sort of a perfect storm, if you will, given the severity of the winter that we faced, plus the fact that we had to actually use a part of our normal salt budget to refill our salt sheds at the beginning of this year because of the previous winter that lasted through the end of April,” he says.

The proposal is included in a bill that has cleared the Senate and a House committee — and is eligible for debate in the full House.