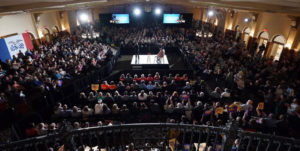 “One of the greatest expressions a society can make as an expression of love for its children is to invest in their education and, by extension, that means invest in our teachers,” Harris said.

Harris is calling for a $315 billion federal investment in teacher salaries over a decade. Her campaign calculates Iowa teachers would see an average raise of $12,000. Harris told University of Iowa students in the audience last night that she hopes this encourages them to pursue teaching as a profession.

“You will be able to follow your passion instead of looking at the debt that you have accumulated from student loans and the bills you have to pay,” Harris said, “and instead, you are forced to take a job working for a pharmaceutical company.”

According to the Harris campaign, the average teacher is paid about 11 percent less than others with similar college degrees. Harris’ plan would spend federal money to boost teacher pay by 10 percent, then call on states to provide money to match any additional federal investment in raises for teachers.

“I think states’ leaders are acutely aware of the deficiencies and the needs of their communities,” Harris told Radio Iowa. “This will give them the ability to, I think, actually have a boost and feel a boost to get back to the business of doing more, investing and supporting our schools, our students, their teachers and our families.”