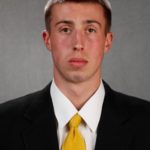 Iowa freshman guard Joe Wieskamp announced Thursday that he has submitted paperwork for entry into the 2019 NBA Draft in order to test the process.

Wieskamp plans to go through the process without an agent. Student-athletes wishing to return to school can do so by withdrawing from the draft by May 29.

“My dream has always been to play in the NBA,” said Wieskamp. “I want to do everything that I can to turn that dream into a reality whenever that may be. I am excited to gain feedback and learn from this process.”

“Joe should take advantage of this opportunity and we fully support his decision,” said Iowa head coach Fran McCaffery. “This rule is a positive one for those in pursuit of their professional dreams. We have had players in the past go through the process, all of whom found it beneficial in gathering information through workouts and interviews from NBA personnel. We will assist Joe throughout the process.”