You are here: Home / News / Rebuilding of some flooded roads will depend on fixing levees 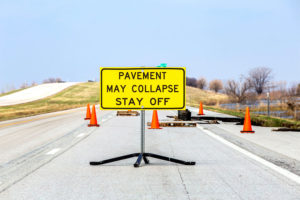 DOT sign indicating the subsurface of the road my be compromised.

Representatives of the Iowa and Nebraska Departments of Transportation provided an update Thursday in Council Bluffs on work to reopen stretches of major interstates and highway in western Iowa and eastern Nebraska.

Iowa DOT Director Mark Lowe says damage assessments continue on parts of Interstate 29, Interstate 680, U.S. Highway 34 and State Highway 2. He says some places will only see temporary repairs as more floods are possible through the summer. “Because that levee system has been damaged and compromised, we are having to work through a period where we have very low levels of protection,” said Lowe. “That is going to affect some of the decisions that we are making and how we approach those things until at least temporary repairs and longer-term, permanent repairs can be made. Most of the areas in the I-29 corridor, we have no more than 10-year flood protection. We also have a nine-mile stretch where we have no more than five-year flood protections.”

They were able to open I-680 from the Nebraska border to I-29 north of Council Bluffs for one lane travel in both directions. Lowe says perhaps the most damaged road is Highway 34 that stretches from I-29 in Mills County to the Nebraska border. He says they have started work on redesigning the roadway, but is one impacted by damaged levees.

“Right now, we’ve still got water in the area, so we’re not able to affect any repairs. As that comes out, we’ll be able to start making plans for how we repair that, but we are going to have to do that in conjunction with the temporary repairs that the U.S. Army Corps of Engineers are planning to make and their progress with that.”

A stretch of Highway 2 in Fremont County remains under water from the interstate to the Missouri River. Lowe doesn’t expect the repairs to take long once the water recedes. “We think the damages are minor and mostly limited to shoulders, which means that we are going to be able to restore at least limited mobility relatively soon,” Lowe says. “We think we can get through traffic between Iowa and Nebraska sometime in May.”

He says they won’t make full repairs until they are certain it won’t flood again. “It is still an area where we have concerns about flooding and re-flooding because of damage to the levee system. It’s also an area the Corps of Engineers has emphasized temporary repair work.”

Additionally, I-29 remains closed from Mills County to just north of St. Joseph. On the Iowa side, Lowe says contractors continue to remove debris from the roadway.”Our belief is that we can restore mobility to all four lanes — including the interchanges at Iowa 2 — by June,” according to Lowe. “Right now, we are working on removing the debris and started roadway reconstruction work by next week.”

In total, Lowe estimates the flooding could cost the state between 70 and 90 million dollars in road repairs, plus additionally money that is needed to fix county roads. The DOT has already started the process of getting emergency bids for the repairs.