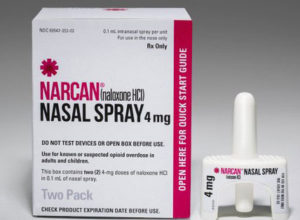 As dozens of Iowans die every year from opioid overdoses, the state is sponsoring a new initiative offering every law officer in the state a free two-pack naloxone kit.

Kevin Gabbert, the state health department’s opioid treatment program director, says the kits are easy to use and they’re genuine life-savers. “This nasal spray can be used to provide naloxone to the person and it’s something that’s done through the nose,” Gabbert says, “and the intent is that it will reverse the opioid overdose that’s occurring and allow time until medical care can be provided.”

Gabbert says if the spray is used on someone who is -not- having an overdose, there are no ill effects. In 2017, there were 206 opioid-involved deaths in Iowa. Preliminary data for 2018 shows that number has dropped to 137. Until those numbers drop to zero, Gabbert says it’s important that our police officers, sheriff’s deputies, state troopers and others are prepared.

“Quite often, our law enforcement personnel are the first to a scene when a suspected overdose has occurred,” Gabbert says. “Having the ability to administer naloxone without delay could mean the difference between life and death. In some cases, it may actually be the law enforcement officer whose life is in danger because of accidental exposure to an opioid or suspected opioid.”

There are about 6,000 law officers in the state and it’s unclear how many individuals or departments may request the kits. The state is planning to make one large purchase, at a discount. “Typically, if a person were to go to a pharmacy and purchase the two-pack Narcan kit that we’re providing, it would be about $150,” Gabbert says. “We’re able to purchase it directly from the manufacturer and obtain what they call ‘public interest pricing,’ and so we can get it for $75 for the same two-pack kit.”

The program is being sponsored by the Iowa Department of Public Health, with support from the Iowa State Sheriffs’ and Deputies’ Association and the Iowa Police Chiefs Association. Law agencies can request the free kits by calling the IDPH at 515-281-7689.