You are here: Home / News / Weather continues to be a mix of spring and winter across the state 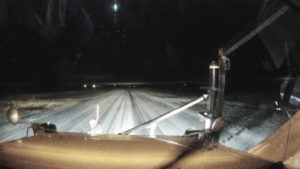 Iowa DOT photo from a snowplow cam on US 69, north of Lake Mills, during the 5 o’clock hour this morning.

The second so-called bomb cyclone in less than a month is bringing Iowa a mix of snow, ice, rain, high winds and the threat of flooding, hail and tornadoes.

Meteorologist Kenny Podrazik, at the National Weather Service in metro Des Moines, says advisories and warnings about the high winds are posted for a wide section of northern and central Iowa. “We’ve had some reports of wind gusts as high as 63 miles per hour, Fort Dodge had wind gusts of 63 miles per hour,” Podrazik says. “We’re starting to get reports of tree damage, too, and the Iowa DOT reported power lines down across northern Iowa.”

MidAmerican Energy reports some 1,800 homes and businesses were without power this morning, while Interstate-35 northbound near Dows was blocked due to a semi that was blown onto its side. An Ice Storm Warning is in effect until Friday morning for parts of northwest Iowa, while several northern counties are seeing snowfall, enough to delay school two hours in some areas.

Podrazik says there’s a threat of more severe weather coming this afternoon. “That’s mainly across the eastern portion of the state, I-35 towards Iowa City, Cedar Rapids, Waterloo, Davenport area,” Podrazik says. “That threat is looking like hail and maybe even a small, isolated tornado threat, too.” The first bomb cyclone brought snow and heavy rain a little over three weeks ago, which translated into record flooding in parts of southwest Iowa.

There were fears this storm would bring a repeat of the flooding. “There is still a threat for that,” Podrazik says. “Some of that snow and rain and mixed precipitation fell into the upper Des Moines River basin so it’ll take a little bit of time to see the impacts of that but not as significant as what we were previously thinking earlier in the week, which is a good thing.”

While some Iowans were outside in shorts and t-shirts on Monday as high temperatures soared into the 70s and low 80s, highs statewide on Friday may only be in the 30s and 40s. The forecast calls for temperatures to warm back into the 60s and 70s by early next week.