You are here: Home / Human Interest / 12-foot-long mastodon tusk being restored at UNI 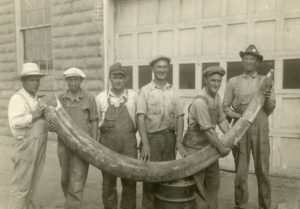 Photo of the tusk in the 1933 Sheffield Press.

A 600 pound, partially-restored relic is on display in the University of Northern Iowa’s Museum.

It was discovered near Hampton, Iowa, and it dates back to when animals that were directly related to elephants roamed the region.

In 1933, a group from the Works Progress Administration was digging at a rock quarry south of Hampton when Lars Jensen’s shovel struck an object that would provide a glimpse into the world’s prehistoric past.

“As they started digging, what they uncovered was the world’s largest mastodon tusk,” Nathan Arndt, the UNI Museum’s assistant director and chief curator.

Jensen actually broke the tip of the tusk off by mistake. Arndt says the tusk was likely washed down river into its final resting place.

“We had proof of this,” Arndt says. “The way, when they found it, it was smiling at them in the bank of the cliff, so you can imagine this tusk kind of a weird, awkward position for what you normally would think.”

A 1933 photo from the Sheffield Press shows Carl Van Horn of Hampton; Bernard Neve  and Lars Jensen of Sheffield; Charles Nielsen of Alexander; Ray Shafer of Hampton; and Art Peters of Alexander all holding the tusk.

The 12-foot-long tusk, which is two feet in circumference, was the largest tusk ever found in the world until the late 1970s.

“It was a huge pride piece for the community,” Arndt says. “We have notes of them carrying it down main street and putting in the rural school for people to come and see.”

The people of Hampton donated the tusk to the museum at the University of Northern Iowa in 1934 for Dr. Emmett J. Cable and his staff to research. 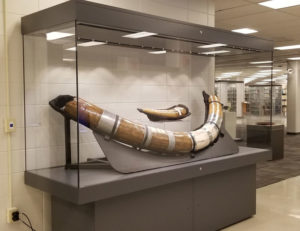 Tusk on display at UNI.

Efforts to preserve the tusk in the early 20th century included lead-based paints, various heavy varnishes, and shellac. Arndt says the tusk remained untouched until 2012 when they began looking at ways to restore the object.

“Decided to write a grant to the Carver Trust and Carver loved the idea because it wasn’t just the conservation of the tusk, but including of students in on the process,” Arndt says.

The Roy J. Charitable Trust donated over $300,000 to fund the restoration. Equipment was also purchased with the grant for students and non-students to utilize for their own research. The museum held an exhibit earlier this month, showcasing their research. Family members of the men who found it were in attendance.

“One of the granddaughters came to the exhibit opening and had some questions and was excited and actually said she knows her grandfather was one of the people in the photographs, but didn’t know which one,” Arndt says. “We were able to show her as well.”

Arndt estimates restoration work on the tusk will continue for another two years. The tusk remains on public display at the UNI Museum in Cedar Falls.