You are here: Home / Fires/Accidents/Disasters / Volunteers needed to help with Hamburg flood recovery 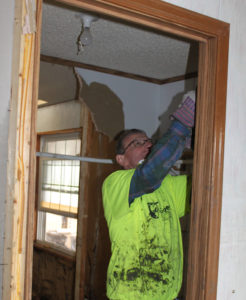 GoServe Global in Eagle Grove is one of the groups helping with the flood recovery, and they are looking for more volunteers.

GoServe spokesman, Dennis Anderson says they are now working in Hamburg. “Gutting and mucking out houses — which means we are tearing out contents which have been destroyed by the flood — and then taking our carpet and some drywall, everything that needs to be taken out to prevent mold from growing,” Anderson says.

Part of Hamburg is still under water and will eventually be ready for recovery. “On the north end of town we still have some work to do, as the water recedes there will be more and more work to do,” according to Anderson. “Unfortunately we’re probably looking at some of those houses as potentially being a total loss. But there are other homes we will have to go in and take out everything down to studs.”

He says they have seen a wide variety of emotions as they work to help the flood victims. “Everybody is different as we all know. Some people — they are really struggling with it at this point — and some of them don’t even want to go back into their houses,” Anderson says.  Other homeowners are on the opposite end of the scale. “You know they have a really good attitude about it — they understand it was a disaster and they had no control over it– and so they are just rolling with it,” He says. “Everybody will process it differently and so some of those people who are doing good now at a later date will probably really struggle with it.”

You can volunteer by calling Dennis Anderson at 712-887-0862. Or you can also donate at the GoServe website.