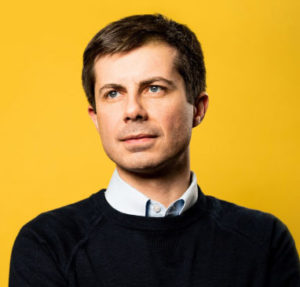 Pete Buttigieg today said he’s focused on providing substance to voters and developing an organization that can capitalize on the surging interest in his campaign for the Democratic Party’s presidential nomination.

“I’m under no illusion that looking good in April of ’19 means that we’re where we need to be in order to win this thing,” he told Radio Iowa early this evening.

Buttigieg’s break-out performance in a CNN town hall broadcast in early March led to a significant spike in campaign contributions and better standing in the polls. Buttigieg said now that he’s “earned a look, even from people who didn’t take us seriously before,” he plans to give voters a sense of who he is.

“Another thing I’m trying to do is avoid some of the mistakes I think in past cycles where we’ve thought that, you know, a flood of white papers was enough to let people understand our values,” Buttigieg said. “What I think we should actually do is lay the groundwork in terms of values and have that accompany any policy specifics we put out there.”

Buttigieg, a 37-year-old, Harvard-educated Rhodes Scholar, is a veteran of the war in Afghanistan. He’s been the mayor of South Bend, Indiana, for the past seven years.

“It’s important for people to get an understanding of where I am on foreign policy and national security. It’s obviously important to me as somebody who has served in the military, but something that I think I need to do a little more work to show people how I approach these things than you can tell, of course, from looking at my record as mayor,” Buttigieg told Radio Iowa. “And so we’ll be making sure in the period between now and the debates to be laying out a vision there, too.”

“If you’re serious about freedom, that means explaining how government should act to enhance our freedom, in addition to the moments when it needs to get out of the way,” Buttigieg said. “If we mean business on democracy, then we should be willing to call a spade a spade and acknowledge that something like the Electoral College is undemocratic and bad for our country. If we really mean it when we say security matters, then we’ve got to have a 21st century understanding of security that goes to everything from cyber security to radical, violent white nationalism.”

Buttigieg spoke with Radio Iowa as he traveled between events in Fort Dodge and Des Moines. Buttigieg addressed nearly 1700 people earlier this evening outside a Des Moines school.