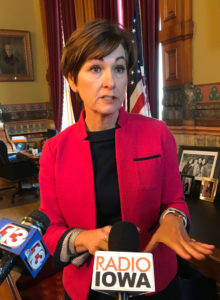 Governor Kim Reynolds says she’s willing to consider a bill that would raise the age for buying tobacco and other nicotine products to 21.

“We need to continue to do everything we can to fight addiction in any form,” Reynolds said late this morning. “I’ll wait and see it in its final form, but I think it’s a conversation that we need to have.”

Last September, the Food and Drug Administration warned there’s been a dramatic spike in teenagers’ use of battery-operated electronic cigarettes which use flavored liquids to deliver the nicotine high. It’s called “vaping” and the governor said it is a growing problem in Iowa schools.

“I had a couple of groups from middle school and high school that sat down with me and they were experiencing a significant increase in that,” Reynolds told statehouse reporters. “…We do need to pay attention to this.”

Reynolds, a recovering alcoholic, has been very public about her own addiction and how her faith has played a role in her sobriety. The 42nd annual Governor’s Conference on Substance Abuse is underway in Des Moines. A seminar this afternoon is titled “Not Your Grandpa’s Cigarette: 21st Century Nicotine Products.”